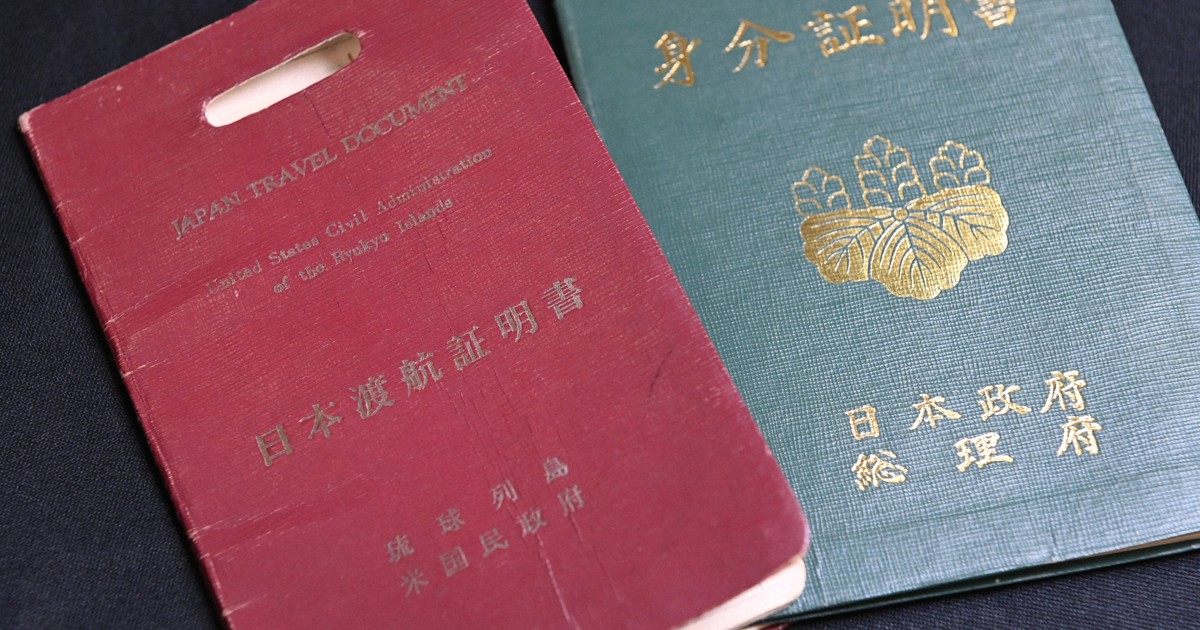 TOKYO – An 80-year-old man from Okinawa Prefecture who moved to Tokyo still has two “passports” he obtained while Okinawa was under US control: a “Japan Travel Document” issued when he enrollment at the University of Tokyo from Okinawa, and an “identification certificate” created after he moved to Tokyo in order to visit his hometown.

Until Okinawa returned to Japan in 1972, travel between Okinawa and the mainland was restricted and controlled by the United States. The Japan Travel Document for traveling from Okinawa to Japan was issued by the United States Civil Administration of the Ryukyu Islands, the American governing body that ran Okinawa.

The travel document was used in the same way as a passport. Although Kazuo Tamaki’s document indicates that his registered domicile was “Okinawa Prefecture”, he was described as a “resident of Ryukyuan” rather than a Japanese national, and the purpose of his trip was “to study at abroad” and not to enter a university.

On the other hand, the identification certificate issued by the Japanese government indicated that he was a “Japanese national” and certified that he was traveling to Okinawa. Mainland entry and exit stamps bore the words “certifying return to Japan” and “certifying departure from Japan” respectively, indicating that travel to and from Okinawa was subject to the same procedures as those for foreign countries.

At the time, permission from the U.S. Civil Administration was required for mainland residents to travel to Okinawa, even if they were from Okinawa, and permission was sometimes denied to those who criticized rule. from Okinawa or were involved in the return movement. Okinawa in Japan.

According to data from that time, between 1963 and the summer of 1967, 144 travel cases from mainland Japan to Okinawa and about 40 travel cases from Okinawa to the mainland were denied. Masao Miyagi, the former chairman of the Hyogo Prefectural Headquarters of the Okinawa Prefectural People’s Association, was among those turned down. Miyagi is said to have repeatedly asked to travel from Hyogo to Okinawa to search for the remains of his mother, who was killed in the 1945 Battle of Okinawa during World War II, but was denied permission during the period of American control. He died in May 2021 at the age of 94.

Tamaki, now a resident of the Setagaya district of Tokyo, graduated from the University of Tokyo and joined the then Prime Minister’s Office (now the Cabinet Office). He served as general manager of the general affairs office of the defunct Okinawa Development Agency. He kept a close eye on Okinawa in his public and private life.

Looking at his old travel documents, Tamaki reflected, “Even though people know the pain of the division of the Korean Peninsula and countries like Germany, I wonder how many Japanese people feel the sadness of the similar division that is taking place. is produced in Japan.

“There is a gap in consciousness and feelings between Okinawans and mainlanders. It’s similar to the issue of relocating US military bases,” he said.