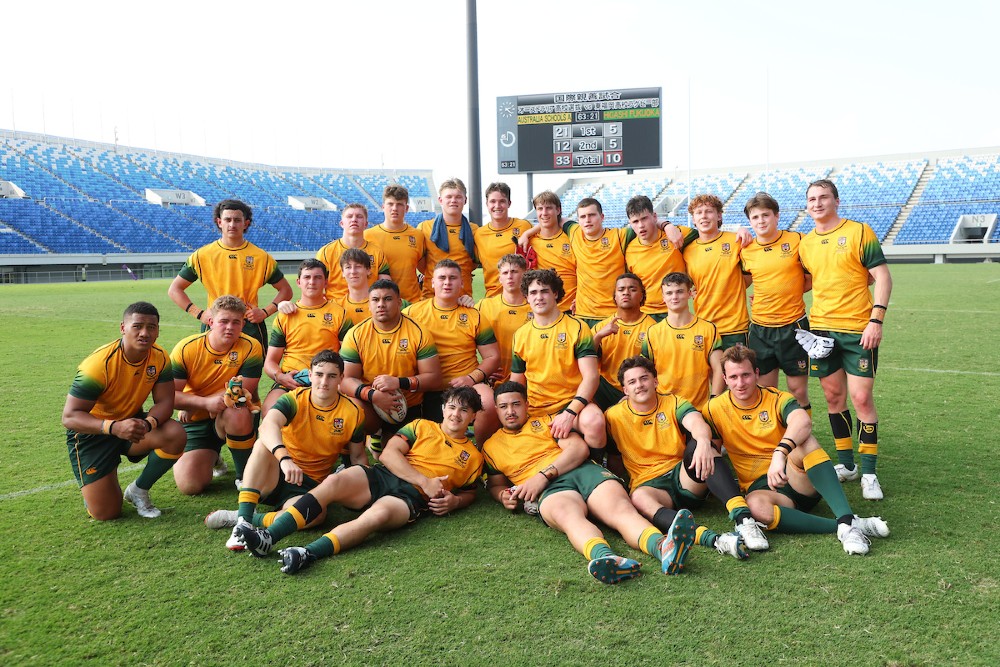 Japan are the new frontier for multi-level Australian rugby over the next seven weeks after a winning start today by Australia A Schoolboys.

The boys displayed the excitement expected of the first Australian Schoolboys team to tour since pre-COVID 2019 with a 33-10 win over Higashi Fukuoka High School in Kumagaya.

The three-match tour ushers in a groundbreaking period in which teams Australia A, Queensland Reds, Western Force and Melbourne Rebels will also embark on tours of Japan.

A 70m try by energetic winger Finn Lawson of Mountain Creek State High School in Queensland was a highlight of the five-try display.

Full-back Riley Langfield, a world away from St Stanislaus’ College in Bathurst, relished the good ball won by the forwards with two tries.

Shore School inside center Leo Bassingwaighte, with his solid defense and direct balls, and Riverview halfback Nick Lamming also stood out in the back.

Up front, Hills Sports High No. 8 Luron Patea was a true master of the line with his heavy balls. Flanker Harry Davis of Scots College, roster leader Will Taylor, another Stannies product, and lockdown partner Seb Bush of Northern Beaches Secondary College also led the way.

Australia’s schoolboys’ connection to Japan dates back 45 years, during the famous 1977-78 tour, when a young and shaggy Wally Lewis played inside the center and scored a try in the 42- 0 against Japanese schools in Tokyo during the stopover in London.

“We only missed a handful of tackles in the whole game and great forwards like Luron set the tone with the way they crossed the line with their carries to give us momentum.

“The boys embrace every part of the tour. They bow to their opponents before kick-off and to the public after the game.

“We have boys like our captain Seb Bush learning a bit of Japanese and big guys like Will McKinnon and Harry setting the tone with their level of sushi consumption.”

Former Wallabies manager Robbie Deans once again showed his sense of the game as he chatted with school children and offered the facilities of his club Saitama Wild Knights who play at Kumagaya Rugby Stadium.

“We have a partnership with Kintetsu and actually share the intellectual property,” Stiles said of the Japanese club where he coached with Quade Cooper and Will Genia on the team.

“Without third-tier competition in Australia, playing games in Japan has a strong advantage and in a friendly time zone.”

The Rebels will take on the Kintetsu Liners on October 15 in Osaka, the Reds will have a November 4 clash against the Deans and Wild Knights in Kumagaya and the Force will have two games against the Urayasu D-Rocks in early November.

Australia’s A team will open a three-game tour in Tokyo on Saturday when the in-form Suliasi Vunivalu, Langi Gleeson, Tane Edmed, Ben Donaldson and Tom Banks can push for selection for the Wallabies in the November Tests.

“I think it’s important to work strategically with Japan and build those alliances,” Rugby Australia chief executive Andy Marinos said on Tuesday of the upcoming Force tour in November.

“Part of the long-term strategy is how can we organically grow the market in Japan and the United States and we’ve talked about that.”

Queensland Reds co-captain Liam Wright says the diversification with off-season tours of Japan goes in the same direction to fill the “massive void” that exists without level between the club and Super Rugby in Australia.

“We’ve been very lucky that the National Rugby Championship has offered more footy and tougher play all year round,” Wright said of the competition which ran from 2014-19.

“There is a void to be filled. The game for the Reds in Japan is a good target and will give some players in the team more opportunities to impress as well as some of the best club players in Queensland.