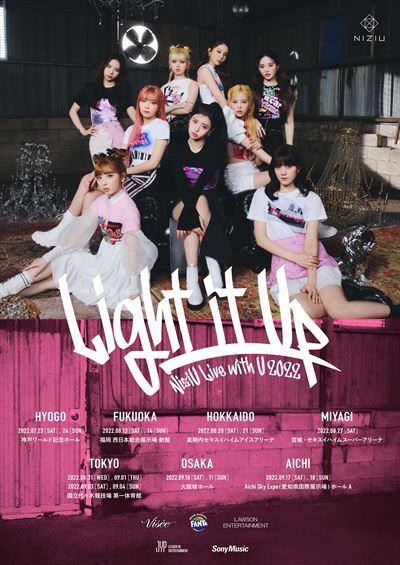 NiziU, the all-Japanese girl group from K-pop powerhouse JYP Entertainment, will embark on their Japanese tour for the first time since their 2020 debut, the company announced Monday.

“The nine-piece band will kick off their NiziU Live with U 2022 ‘Light it Up’ tour on July 23 and hold 15 concerts in seven cities,” JYP said in a statement. “The first leg of the tour will take place at World Memorial Hall in Kobe.”

NiziU is also set to perform in Tokyo and Osaka, among other places, and wrap up its tour in Tokoname on September 18. This is the first time that NiziU has given a series of solo concerts in front of a live audience.

“Everyone is looking forward to our tour,” NiziU said via JYP. “We are so happy to finally be able to start this summer. We can’t wait to see our fans.”

NiziU is made up of nine winners of “Nizi Project”, an audition show launched by JYP and Sony Music of Japan to seek out aspiring singers who are proficient in Japanese. In the show airing in Japan in 2020, Mako, Riku, Rima, Rio, Maya, Miihi, Mayuka, Ayaka and Nina were singled out.

The group reigned atop a number of Japanese music charts―including Line Music and Rakuten―with their pre-debut track “Make you happy” (2020), and have since released numerous hits such as “Step and a step” (2021) and “Take a Shot / Poppin’ Shakin” (2021).