I’m a travel writer who stopped flying during the pandemic. Can I keep it for the climate? 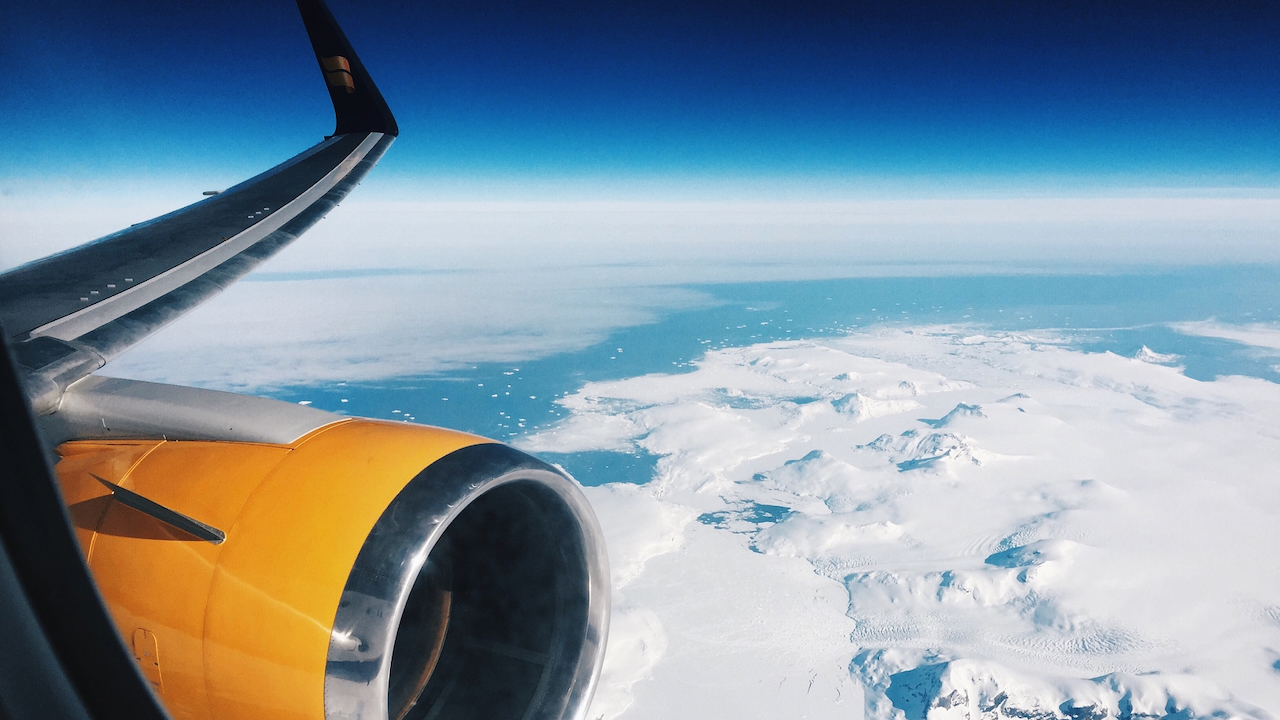 The view from my window seat, flying over Greenland. Air travel melts more than 5,000 square meters of summer sea ice in the Arctic each year. (Photo: Kat Tancock)

It’s January 29, 2020. My boyfriend and I are in bed, discussing our fast approaching weekend in Mexico City. The novel coronavirus made headlines, including, days earlier, the first reported case in Canada.

None of us want to face that thought, but my boyfriend said it, “Should we cancel this trip?”

“We’re going to Mexico City,” I reply firmly. It’s been ages since we’ve seen our close friends who live there, and it’s hard to synchronize our schedules. So we put our worries aside and flew a few days later for a weekend filled with churros, guacamole, art and architectural walks.

Little did I know this flight would be our last before the world changed.

The pandemic and its series of confinements have changed everyone’s travel habits. Air passenger numbers fell by 92% between April 2019 and April 2020, just months after our trip to Mexico City, and for 2020 as a whole, international air travel fell by 60%. Road travel, of course, also fell. At the start of the pandemic, those who sat at home munching on sourdough marveled at scenes of clear skies over typically polluted cities like Delhi and Los Angeles.

If you had asked me a few years ago, I would have laughed in disbelief at the thought of not flying for two years in a row. But now, 27 months after that four-day getaway, we still haven’t left the ground. It started as a way to avoid catching and spreading COVID-19. But all this lockdown-induced free time to ruminate has got me thinking about the other slow-moving global catastrophe — and my role in it. I stopped flying because of a pandemic. Can I continue for the sake of climate change?

Letting go is personal, and what’s easy for one of us to let go can be a deal breaker for another. For me, cutting red meat at 13 and chicken and fish at 16 was no sacrifice at all, and I never missed them. But traveling by plane? It’s been part of my identity since before I had an identity.

I took my first international flight at six months old, to meet family in New Zealand, and I still have my Air New Zealand Junior Jet Club travel diary lying around somewhere. As an adult, based in Toronto and with his family on opposite coasts, hops across Canada became a regular adventure. The same goes for work trips, like spending a day in Winnipeg or Fredericton to give a workshop or talk. Vacations, of course, are part of the count: a yoga retreat in Argentina, a music festival in Wales, a beach getaway in Curacao.

And then there’s travel writing. For much of the 2010s, I traveled the world covering destinations like Hong Kong, Iceland and Croatia for magazines and newspapers. I knew the environmental impact was significant, but my denial was even greater. I don’t eat meat and I don’t have a carI would say to myself. It balances. 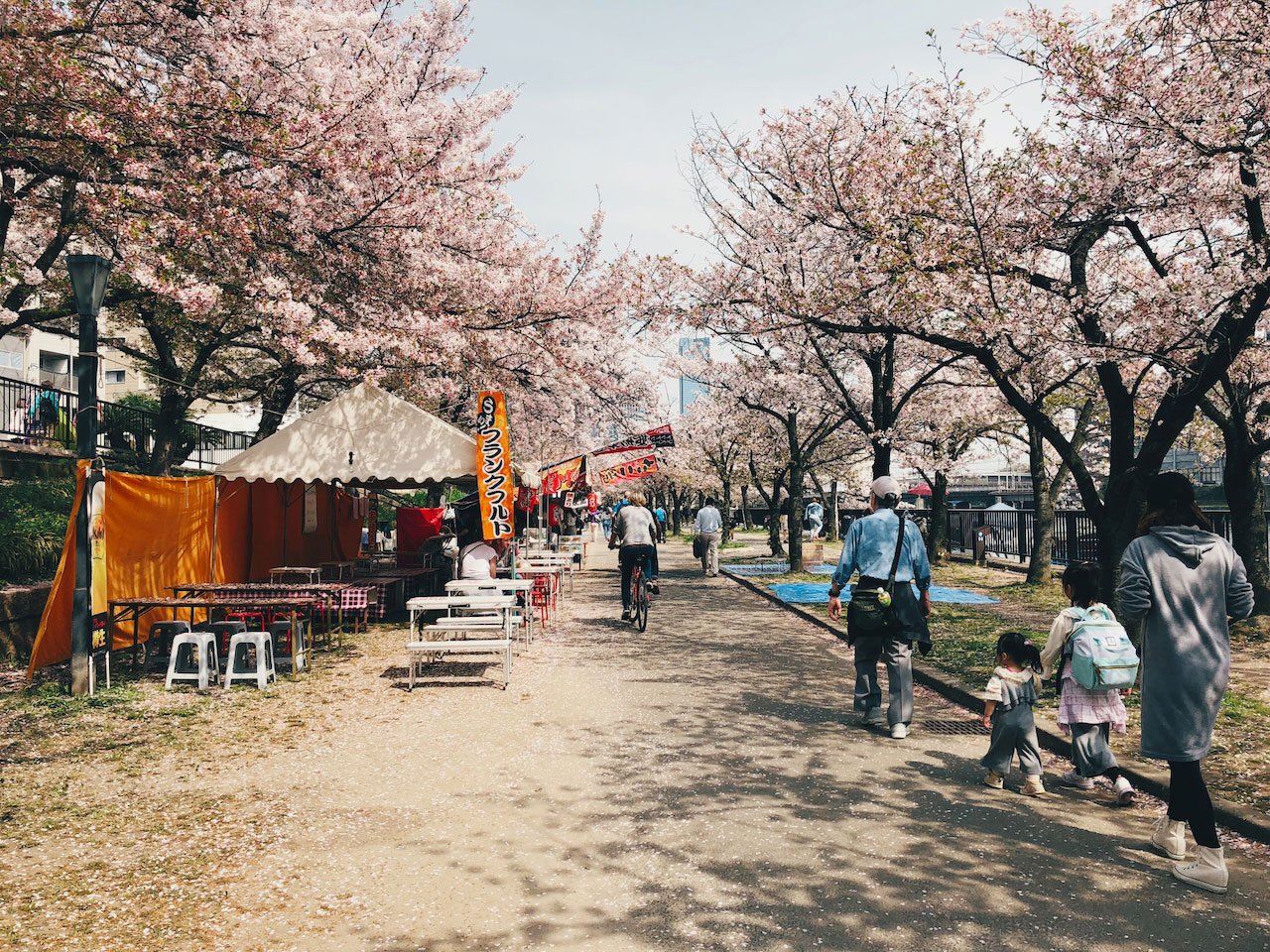 While I had to fly to Japan, once there I made use of the country’s excellent rail network as well as walking and cycling. This scene is taken from a bicycle tour in Osaka. (Photo: Kat Tancock)

I added up all the flights I took in 2016 – it was a relatively big travel year, including trips to Singapore, Alaska and Switzerland – and there were 37 individual legs, for a total footprint estimated at around six tonnes of carbon dioxide equivalent (tCO2e). Just for flights. For context, the average transportation footprint in Canada is about five tonnes per year (out of a total lifestyle footprint of 14 tonnes), which primarily includes driving. The goal we should aim for? A total of 2.5 tonnes by 2030, slightly less than the current impact of the average person in India. In other words, flights to Singapore might have to go.

But how much flight time is acceptable? It’s an impossible question that goes to the heart of global inequality: half of commercial aviation’s CO2 emissions come from barely 1% of the world’s population, while more than 80% of humans have never taken the plane.

One group trying to simplify decision-making is The Jump, a UK-based organization whose aim is “less stuff, more joy”. They describe six lifestyle changes that most people in rich countries should adopt to fight climate change, one of which is a drastic reduction in flights: we should plan a short-haul flight (less than 1,500 km ) every three years, or roughly from Kelowna, BC to Winnipeg—or a long haul every seven. Not so terrible, perhaps, if you can take the train to Zurich or Zagreb for a getaway. But what if you’re like me and visiting your parents means a long-haul flight?

To help me break down some numbers, I reached out to Angela Nagy, President and CEO of GreenStep, a Kelowna, BC-based consulting firm that helps businesses and organizations reduce their environmental impact. . Flying less and zooming more is one of the many recommendations Nagy and her team make to customers, she says. Face-to-face is nice, but it can often be replaced by virtual meetings, as we’ve all learned over the past couple of years. There are also a few tricks to reduce your impact when you have to fly, like choosing economy, keeping your luggage light, and opting for direct flights. And Prince Harry himself is behind an initiative to make it easier for us to choose low-emission routes.

But where Nagy really gets excited is in the potential of infrastructure to help everyone reduce emissions: innovations like ubiquitous electric vehicle (EV) charging stations, excellent public transportation, electric planes, high-speed trains and ubiquitous bike paths. The goal is alternatives to fossil fuels that are a joy to use, not a sacrifice. “We seriously need to start investing,” she says, “maybe diverting some of the carbon taxes to things that will allow us to reduce our carbon footprint as a country.” 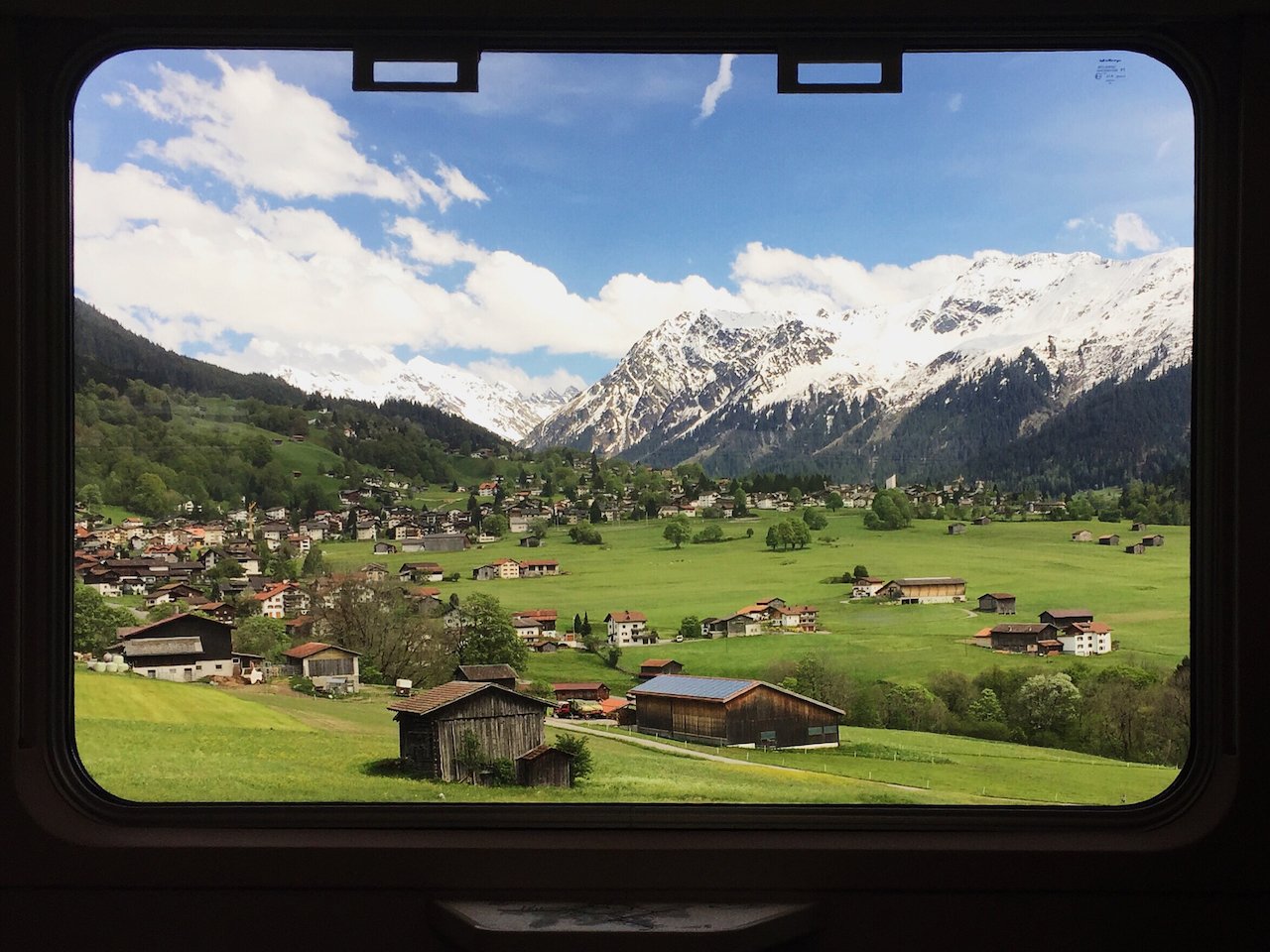 The Swiss rail system is so extensive, efficient and fun to use that it’s easy not to drive in favor of views like this en route to St. Moritz. (Photo: Kat Tancock)

And that’s where international travel – when done sparingly – can be a good thing, as it helps fuel our imaginations of what’s possible. In Switzerland, for example, I saw people taking the train (frequent, comfortable and convenient) to the top of the slopes, boots on, skis and poles in hand. Imagine being able to do that in Canada. Or having the option of a high-speed, low-emission train that goes from Calgary to Edmonton or Toronto to Montreal in less time than it takes to fly or drive, like the high-speed trains between Tokyo and Osaka.

I have personally strategized to get around the country without flying, as family visits are non-negotiable for me. Canada’s long-distance trains are questionable when it comes to emissions, says a University of Ottawa researcher, who found they may actually be worse than planes, in part because of their diesel engines . I asked Nagy if car travel was a potential solution, and the answer is yes, if you’re in an electric vehicle. Averaging the source of electricity, his team estimated that a two-person round trip from Toronto to Kelowna in a Tesla Model Y would cost 0.21 tCO2e, compared to 1.86 tCO2e for the flight and 1. 87 tCO2e in a petrol car. (Nagy points out that these numbers don’t include the embodied carbon of vehicles — the energy and materials that go into making them in the first place.)

Of course, skipping that flight to Singapore or taking a road trip to British Columbia isn’t going to stop global warming in its tracks. And I strongly believe that we must abandon the idea of ​​fixing climate change simply by reducing our personal carbon footprint, even if it is an important part of it. We need institutions, companies and governments to intervene. It is a societal problem that requires societal solutions. Besides, honestly? It’s rich enough of me to spend decades traveling around the world and suddenly announce that I’m going to cut back just when someone else might be planning their very first trip out of the country.

But personal change to solve societal problems is a bit like voting. Your vote alone will almost certainly make no difference. But your votes and your neighbors ? This is what makes or breaks an election. How about voting and campaigning for the cause you believe in? This is what changes the world.

So I’m going to do my best to keep flights down to the essentials – ie see my family (when I can’t drive) and vacation once in a blue moon, but probably not business trips. I will help promote clean transportation options that make switching away from fossil fuels a no-brainer. And I’m going to talk about it as much as possible without boring my friends. Because every little bit counts when it comes to the consequences of climate change. For inspiration, I look to the words of climate justice writer Mary Annaïse Heglar in the book All we can save“I know that a world warmed by 2 degrees Celsius is far better than a warmed by 3 degrees, or 6,” she writes. “And that I’m ready to fight for it with everything I have, because that’s all I have.”

Receive Chatelaine in your inbox!

Our top stories, recipes, style and shopping tips, horoscopes and special offers. Delivered every morning of the week.