Japan reopens to tourists: discover the country at its most peaceful | Travel

JThings seemed more or less normal at the Royal Bar of the Palace Hotel Tokyo. Mr. Ohtake crafted a dry martini with the precision of a Swiss clockmaker, the lighting was spotless and the live jazz wafted through the air with the sound of chatter. Covid was still hidden – staff still wore face masks, plexiglass screens divided the bar and arrivals’ foreheads were scanned with an electronic thermometer. None of these things, I’m happy to say, affected the martini.

Japan never had a mask mandate during the pandemic – the government simply asked its citizens to comply – but almost all residents were wearing them when I visited a few weeks ago. And although the guidelines were relaxed earlier in the spring, allowing people to go out without a mask, the dual force of public shame and national duty meant that few took up the offer. As the country took its first steps towards reopening to tourism, masks were still an integral part of daily life.

Tourists have not been allowed to enter Japan since early 2020 – I was there on a business visa – but during my trip it was announced that limited group tourism could start on June 10. Visitors should wear masks inside and out, and be part of an organized itinerary with a licensed guide, but there were hints it wouldn’t be long before everything got a little more relaxed .

I’ve been to every prefecture in Japan and spent more time there than almost any other foreign country. But for my first trip home after a long absence, I wanted to follow the classic Golden Route from Tokyo, heading west to Hakone hot springs, then on to Kyoto, to see what, the if so, had changed.

Masks aside, very little looked different in Tokyo. The bars were packed to capacity; the trains overflowed; and navigating Shinjuku, the world’s busiest station, always felt like being wrung out in a clothes dryer. The largest city in the history of cities has shown few signs of torpor. But when talking to the locals, I realized that this was only a recent phenomenon.

“Like everyone else, we thought we’d just get spring work and then go back,” said tour guide Brett Plotz, as we snuggled into Gyoza no Antei, an impossibly greasy dumpling joint in a smoky alley in the shadow of Shinjuku Station. Usually a busy guide for a tour operator inside Japan, Plotz has gone more than two years without clients. “I selfishly thought, ‘I can really enjoy cherry blossom this year,’ he said. “I took my wife and daughter, and it was cool, but three seasons of cherry blossoms, it’s not so cool anymore.”

From Tokyo, I went to the hot spring region of Hakone, then took a local line to Odawara after a quick blast on the bullet train. The slow train climbing the mountain felt like it belonged somewhere else – Sri Lanka, perhaps, or India. A noisy old rattlesnake, he crawled and creaked to Gora Station ascending the second-steepest railway grade in the world, through roughly hewn tunnels and three archaic switchbacks. Sake is served at Shinjuku, the busiest station in the world

As far as I know, I was the only foreigner on the train and didn’t notice any others either in the next two days around Hakone. Taller, grayer and fatter than most locals, I already stood out, something I didn’t want to emphasize by not wearing a mask. I had only been back home for a few days but I already felt motivated to comply.

When I arrived at Kai Sengokuhara, the hotel staff seemed nervous as they greeted me – hands were shaking as they passed me forms – and some later confessed they were worried about their English atrophying after so long without western customers. More than that: what if nobody wanted to come back? There was nothing to worry about, I said. The hot springs that this town is famous for still hold a lot of appeal, as does the chance to try royal baths kaiseki dine and catch a glimpse of mighty Mount Fuji as it loomed through the clouds. Whether the guests are Japanese or foreign, this place would always be popular.

The next day I allowed myself to exceed Kyoto by a few minutes to visit Osaka first. Overly touristy, Unesco-friendly and sometimes arrogant Kyoto is often compared to Edinburgh, while friendly, grease-and-beer-soaked Osaka is said to have more in common with Glasgow. Well, I live in Glasgow, and that comparison doesn’t bother me – nor does Osaka, a city that’s as fun as it is ugly, where people don’t always color in the lines.

In this city, fewer people wore masks outside, while the setting sun seemed to grant the freedom to completely forget about them. As the Dojima neighborhood geared up for a surprisingly noisy Monday night, I dove into the Upstairz Lounge at the Zentis Hotel. The property opened in 2020, but with international borders closed, it hadn’t had a chance to start. Head bartender Norihiko Furuse was understandably frustrated that he couldn’t make his wonderful medicines for a wider audience. “This Covid situation means we’re not often busy,” said the 33-year-old. “Japanese ingredients are important to me, and I want to show how good our cocktails can be.” Osaka, like Tokyo, felt busy enough that it was hard to notice the drop in the number of foreigners, but 13 minutes by bullet train to Kyoto, the differences were profound. Japan’s former capital has long been a fantastic destination for travelers around the world, with its popularity reaching levels that seemed unsustainable before the pandemic. At its peak in 2019, the number of arrivals to Japan reached a dizzying 32 million. The majority of these visitors – especially first-timers – would have come to Kyoto.

The May 2022 chart was very different. There were still visitors, but they were hordes of Japanese children roaming the ancient streets on school trips, some daring to say hello to westerners, most buying cheap trinkets or, for unknown reasons, cat masks. Although they brought a sense of life to the city, they did not bring much revenue.

“Domestic tourists like them aren’t that helpful to us,” Mayuko Asai of Hyatt Regency Kyoto said that evening. “We are an international hotel; we need international customers. To me it looks like a ghost town now, especially at night.

The next day, I walked around Kyoto with another of Inside Japan’s guides and translators, Richard Farmer. We went to Fushimi Inari Shrine, normally one of the most unbearably busy sites in town. We didn’t have the 1,000 vermilion torii gates to ourselves, but there was certainly room to breathe. 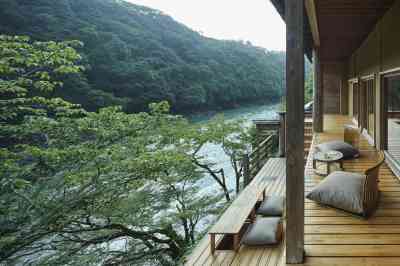 Just outside the shrine complex, we found Mr. Sakimoto roasting sparrows, trying to tempt people inside the Hinoya restaurant. The birds are allegedly a local delicacy, but also a novelty dish for daring tourists – a teacher who was leading a school trip ate one and declared it “very crunchy”.

“A lot of businesses around here have closed,” Sakimoto-san said. “But we are fighting hard. I hope next year will be better. »

As we wandered around town, enjoying the fact that we could visit any temple we wanted without fear of being decapitated by a selfie stick, Farmer fired off the overtourism claims. “It wasn’t that all of Kyoto was completely overrun before Covid. It’s just that people have a checklist of sites – and those places were very busy. The numbers will not immediately return to 2019 levels when the borders open. It will all depend on when Chinese groups are allowed to travel again, he said; they travel in such large numbers that they have a big impact on these popular sites. So come now, in your own small group, and you’ll see Kyoto at its most peaceful. Many visitors to Kyoto feel the need to retire at the end of the day. And tranquility is a specialty of the Hoshinoya Hotel, which is accessed by boat in the northwest part of town. Blending Japanese tradition with Western comfort, it has long been one of the country’s most popular stays for domestic and foreign tourists.

It was nearly full when I arrived, but there was still a very special Japanese calm. My room could not have been in any other country: there was the smell of tatami mats, the soft “clop” of wooden doors closing, the hissing of the gentle river and the insistent green of the maple trees, just in front of the window. As I always do, I politely pretended to enjoy a matcha tea, then started planning my return – most likely in October, when the maples would be crimson and the masks might be a thing of the past. A maiko, a trainee geisha, in Gion, Kyoto

Can I go to Japan? What are the entry requirements?

Japan now welcomes tourists from 98 countries, including the UK, if they join a fully escorted group trip with a set itinerary, run by a tour operator registered with the Japan Tourism Agency – this includes a few operators British (japan.travel).

You do not need to self-quarantine or take a Covid test upon arrival in Japan, but you must produce proof of a negative PCR test 72 hours prior to departure and adequate medical insurance covering Covid.

While in Japan, you can use public transportation and stay in hotels and ryokans. Your tour operator will advise you on guidelines on things like mask-wearing and hygiene etiquette (there are no mandates).

Restrictions are expected to ease further, possibly even within a month, to allow self-guided travel to resume.