Overseas travel requests to be collected as self-quarantine requirement lifted 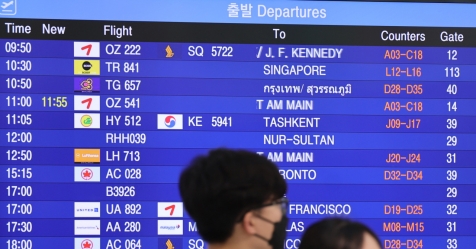 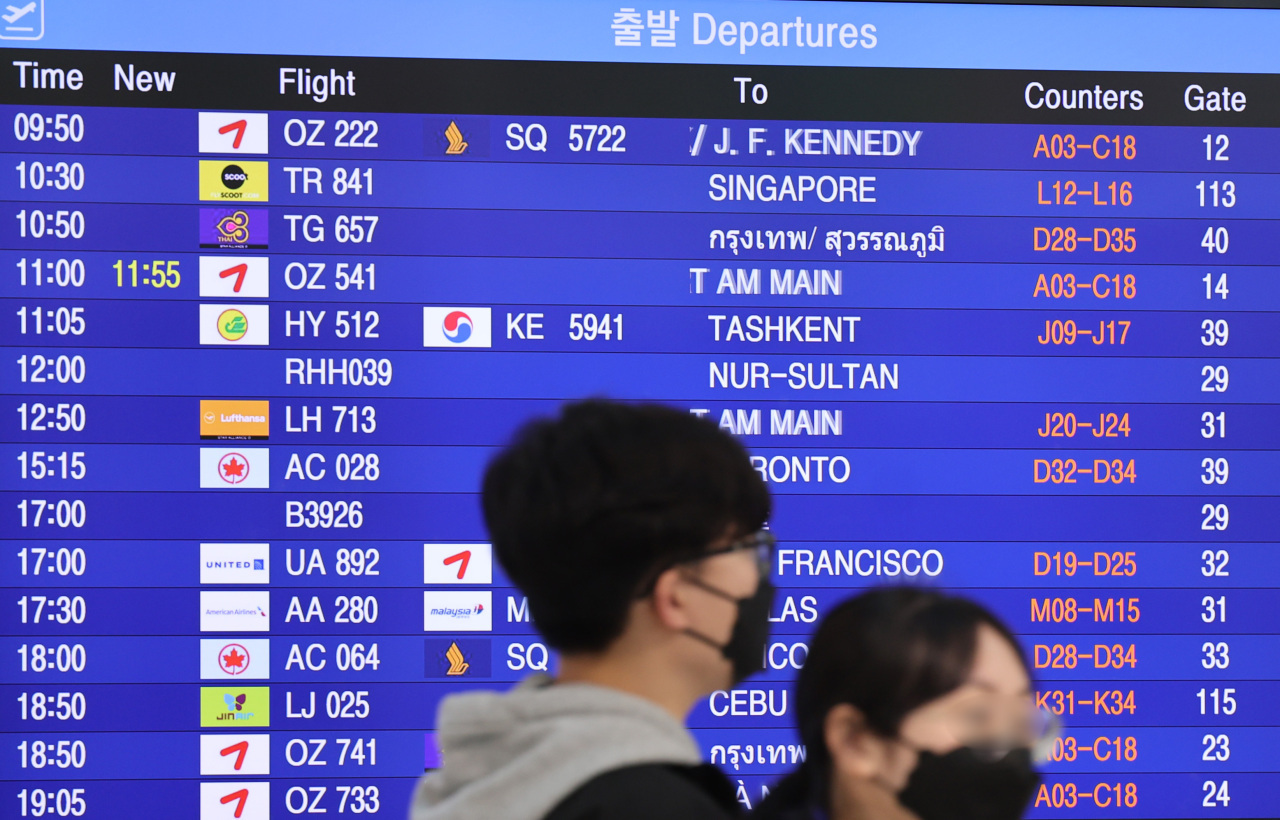 Flight departure times are shown at Terminal 1 of Incheon Airport on Monday. (Yonhap)

Outbound travel demand is expected to increase from Monday as the government exempted vaccinated people from the seven-day self-quarantine upon returning to South Korea.

The Disaster and Security Countermeasures Central Headquarters announced that those who received their first dose of the Janssen COVID-19 vaccine 14 days before arriving in South Korea and those who completed their second or third dose of other vaccines must be exempt from self-quarantine upon arrival.

The measure is expected to increase the number of travelers at Incheon Airport from Monday when it comes into effect.

On Monday, the airport was expecting a total of 11,530 travelers, including 5,411 departures and 6,119 arrivals, according to Incheon International Airport Corp. at time of going to press.

The forecast is slightly higher than the recent average of 10,000 travelers per day at Incheon airport, but the number shows that demand for outbound travel will gradually recover.

Before the mandatory quarantine requirement was lifted, travelers could only travel to countries with which the government had a travel bubble agreement, such as Singapore and Saipan, without having to remain locked down for seven days upon arrival. .

In response, airlines that had been hit hard by the pandemic are resuming international flights.

Asiana Airlines has announced that it will resume flights to Nagoya, Japan from April 1.

The road from Incheon to Nagoya had stopped on April 29 due to the pandemic.

Additionally, the airline will increase flights to major tourist spots in Japan starting this Sunday.

Starting April 3, the airline will resume flights from Incheon to Hawaii, a route that had been suspended since March 2020.

Low-cost carriers are also preparing for a return to pre-pandemic normalcy.

Jeju Air will resume flights from Busan to Saipan from next Wednesday and plans to increase the number of international flights it currently operates, such as those from Incheon to Osaka, Manila and Cebu.

Jin Air will resume flights from Busan to Guam from April 16.

Although travel demand is expected to pick up, rising oil prices are weighing on the aviation industry.

Due to skyrocketing jet fuel prices resulting from Russia’s invasion of Ukraine, airlines will increase fuel surcharges in April.

The surcharge for one-way tickets on international routes will range from 28,600 to 211,900 won, a maximum increase of 53.3 percent from this month.

“We expect travel demands to increase, but since we use about 30% of our operating expenses for oil, rising oil prices are a new and looming concern,” a company official said. airline who requested anonymity.