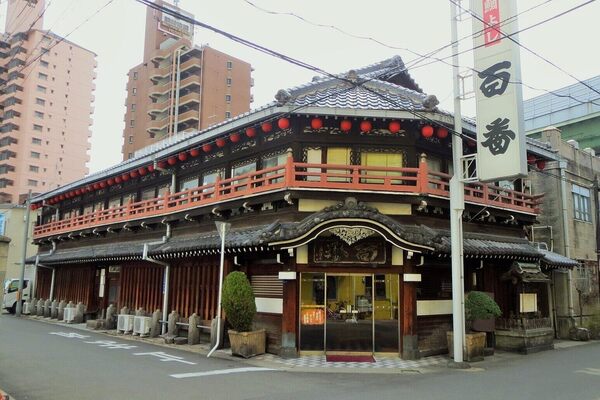 Taiyoshi Hyakuban opened in the The Taisho era over a century ago in western Japan’s largest red light district, Tobita Shinchi. Like many brothels of that time, it took the form of a ryōtei, a luxurious Japanese-style restaurant to avoid detection. Over time, it ceased its brothel activities and became a traditional Japanese restaurant.

Historically, Japan’s red light districts were characterized by their otherworldly extravaganza, much like the public baths depicted in the 2001 film. Abducted as if by magic.

The shrine-style exterior alone is impressive, but there is another entrance, a replica of the famous Yōmeimon Gate, inside the hall leading to a bygone era. The second floor hallway spans a plaza around a garden-style atrium, traditional arched decks connect a variety of dining rooms with different themes and features.

For example, a few yakatabune-Inspired rooms may have boat pieces encrusted in their walls and floors, while some rooms are designed to recall the era of the samurai. Some of the larger dining rooms feature wooden stages, where geishas once danced and sang for guests.

The Japanese government designated Taiyoshi Hyakuban as a tangible cultural property in 2000, given its historical value. While the place is extravagant in architecture, a major factor in the restaurant’s popularity is its reasonable prices. The affordable menu ranges from easy-going fondues to sukiyaki and sashimi (or otsukuri as it is called in the region).