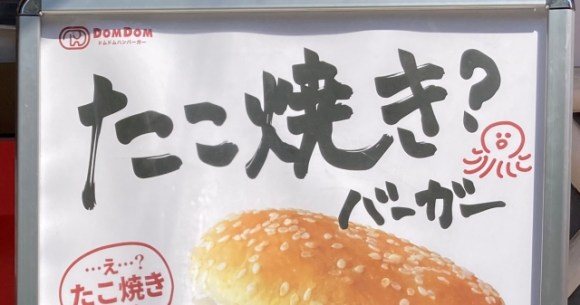 “Huh? Takoyaki?!” is the perfect tagline for this weird new offering.

While much has been written about opposite ends of the Japanese culinary spectrum, from casual fast meals like ramen to formal cuisine like kaiseki, homemade burger chains tend to be overlooked, despite their fantastic local specialties.

That’s okay, though, because their under-the-radar status means we take advantage of all their best kept secrets. And because you’re our burger-loving friends, we don’t mind sharing some of these secrets with you, including the one Mr. Sato recently discovered at one of our favorite local burger chains, Dom Dom.

Dom Dom has been serving customers in his home country of Japan for over 50 years, and he’s always on the lookout for new food trends and creative menu ideas. In the past they have wowed us with weird items like the Whole!! Crab Burger, and now Mr. Sato found out they had a Takoyaki? burger on the menu for a limited time.

The burger came with a cute sticker on its wrapper that said “takoyaki” in Japanese. Next to it was an octopus, the main ingredient in takoyaki, holding… a takoyaki.

As you can see, takoyaki are round and fried octopus balls, and if they weren’t so hot, you’d be able to fit three comfortably in the palm of your hand. So when Mr. Sato unwrapped the burger, he expected to see a few takoyaki balls sandwiched in a burger bun, but instead he saw this.

▼ Um… this topping looks more like a fried croquette?

Lifting the top of the bun, Mr. Sato looked inside, searching for octopus balls, but it came back empty. The only thing in it was gravy, cabbage and a flat, fried piece of something that looked like croquette or katsu (fried cutlet).

Mr. Sato pulled out his phone and did a quick search for the product on the Dom Dom website, where he found the following description for the ingredients in the burger:

“Takokatsu, which is filled with octopus, is topped with sauce, bonito flakes and green lettuce. It goes well with crispy cabbage.”

So the fried cutlet was a Takokatsu!

Reading further on the website, Mr. Sato discovered the reason for the takokatsu:

“If you try to sandwich a round takoyaki, it will roll away, so we made a crispy ‘takokatsu’ out of it and sandwiched it in the bun!” This product is both easy to eat and delicious! When you eat it, you’ll understand why we still call it ‘takoyaki’!!”

Although Mr. Sato was still a little uncomfortable with the word “takoyaki” being used when the round balls associated with them were not found, it was tickled by the “it will roll away” because of the unconventional-looking ingredient, so he put his fears aside and took a big bite of the burger.

Mr. Sato’s eyebrows rose in surprise as he chewed and discovered that…it actually tasted like takoyaki! Sure, the coating was much crispier, but as for the filling, it was identical to what you’d find inside a takoyaki ball, and the sauce and mayonnaise filling completed the familiar flavor profile. . They certainly weren’t wrong when they said you had to eat it to understand why it’s called “Takoyaki?” Burgers”!

As Mr. Sato finished his meal, he remembered how good Dom Dom was at capturing the taste of Japan in his burgers. This latest offering is a fantastic sequel to the chain’s whole fried crab burger and he highly recommends trying it. Mr. Sato himself will definitely go back for a few seconds, and next time he will wear his takoyaki sneakers while there.

Images © SoraNews24
● Want to be up to date with the latest articles from SoraNews24 as soon as they are published? Follow us on Facebook and Twitter!
[ Read in Japanese ]