With no travel restrictions in place, crowds swell over the holidays 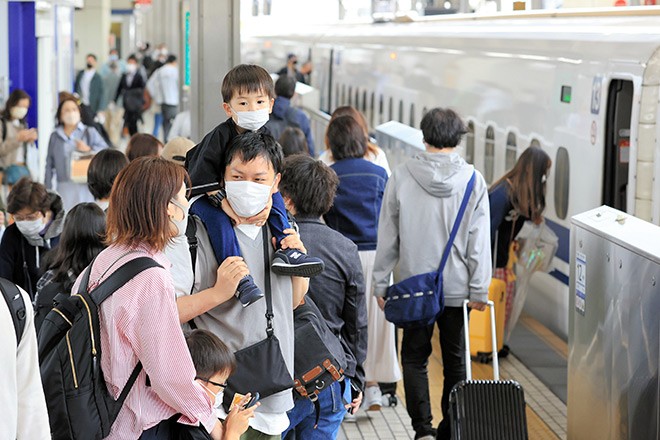 Crowds at major train stations across the country have quadrupled from a year earlier during the Golden Week holiday in the absence of travel restrictions for the first time since the pandemic hit in early 2020.

Osaka and Nagoya stations saw notable increases of 5% and 14%, respectively, even from the pre-pandemic year of 2019.

Estimates based on location information of cellphone users by NTT Docomo Inc. showed that many transportation hubs and tourist destinations saw a significant increase in visitor numbers this year compared to last year.

Crowd levels at these sites were comparable to those recorded in 2019, although a sixth wave of new coronavirus infections that emerged in early January remains a concern despite a sharp drop in cases over the past month or so.

Visitor numbers were estimated for Tokyo Station, Nagoya Station, Osaka Station and five other major rail hubs, as well as the main thoroughfare of Kokusai-dori in Naha, a tourist attraction in the prefecture. from Okinawa.

The study found that the nine locations have continued to prove particularly popular with visitors after numbers plummeted in 2020.

Crowds at Tokyo and Osaka stations were significantly higher this year, compared to last year. The former recorded three times as many travelers and the latter recorded a 4.3-fold increase.

Still, crowds at Tokyo Station this year were smaller than in 2019, accounting for 59% of the figure at the time.

Takamatsu Station in Kagawa Prefecture on Shikoku Island saw a 32% drop while Kokusai-dori Street saw a 24% drop in visitors.

But the decline from 2019 was less than 10% at Sapporo, Sendai and Hakata stations.

The first case of the novel coronavirus in Japan was confirmed in January 2020.

This prompted authorities to call on people to refrain from non-essential travel to other prefectures during the Golden Week holiday that year as a state of emergency was declared across the country. .

But this year, pre-emergency measures that once applied to 36 prefectures, including Tokyo, were lifted on March 21.